ECUADOR: AT HOME IN THE MIDDLE OF THE GLOBE 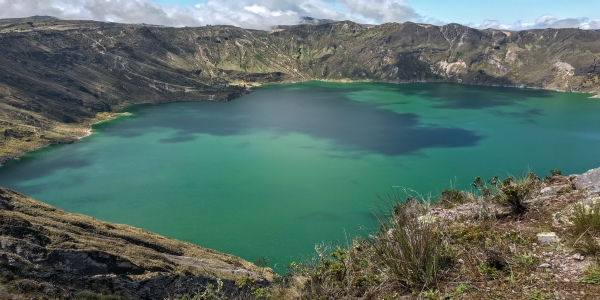 Aside from the Galapagos Islands, there are many other things to love about Ecuador. First of all, I have a thing for active volcanos, and in addition to that, I really wanted to have each foot planted on both sides of the equator at the same time.

Only to discover that this line was actually a few hundred meters off the mark! We had a big laugh about it, and then went over to the equator, which was thankfully marked with 00 latitude.

We also learned that some of the best cacao beans are grown in Ecuador. Since I am a certified chocoholic, this was a great discovery. One of the things I'm looking forward to when I go back to Ecuador is a two-day visit to a cacao farm in the middle of the Amazon.

So, Ecuador is the land of volcanoes, and we went to one of the biggest ones, Pichincha Volcano. It's 4,784 meters high. We needed to go slow because of the altitude, but once we were there the view was so worth it. Don't you agree?

Oh, and layers of clothing are preferable to, say, one heavy jacket. The temperature fluctuated quite a bit and I was glad that I was wearing several layers so that I could adjust easily to the temperature changes.

Rain gear is also a good thing to bring when climbing Pichincha, because you never know when it will start pouring. And, since it will just be you guys for many kilometers (you may not have a chance to buy food and water) bring at least a liter of water and some fruit or protein bars.

City life is also huge in Ecuador. We visited Quito's La Mariscal neighborhood for the nightlife scene, and then in Guayaquil, we went over to Las Penas. Guess what? Once there, instead of going to a bar, we ended up singing karaoke along with some very enthusiastic natives. It was a night to remember,  tell you.

One of my favorite places in Ecuador is the Basilica of the National Vow--Basilica del Voto Nacional, found in the nation's capital of Quito, the biggest neo-Gothic church in all of the Americas. This unfinished church is intriguing, to say the least. There is a rumor that says that when construction on this church is done, the world will end.  Not that I believe it but we all found it cool and creepy at the same time.

Since Ecuador is only four hours from Miami, and the country has been using dollars as their currency for more than a decade, I'm definitely coming back!